I’d like to proudly announce that the next feature from Strike a Pose!!! Films short film will be BITE THE HAND, a gritty, dramatic hitman thriller, directed by Dylan Hintz, written by Tom Murphy, shot by Habib Awan, and starring Paul R. Sieber. Find us on Facebook HERE! 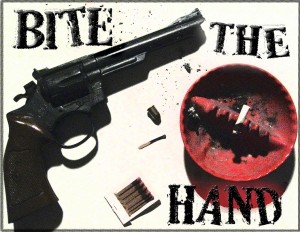 A job comes along that Jack doesn’t like- whacking the wife and kids of his “client.” When he refuses, Jack knows someone will be coming to retire him, courtesy of his boss, Mr. Callahan. What he doesn’t know is Red is a new recruit with nothing to lose- a hungry dog looking to eat. Jack decides to try and educate the young killer that some orders are best refused, and some lifestyles aren’t worth living.

This project has been in development for almost a year now, primarily going through draft after draft of an excellent original script written by Tom Murphy. The story, conceived by Murphy and myself, started as a humble “two guys in a room trying to shoot each other” hardboiled semi-action flick, and evolved into the dramatic tale it is today- a darkly humorous mediation on the themes of loyalty, betrayal, and killing to live.

Habib Awan, cinematographer on Jack’d Up and All in the Game, will be shooting the film.

Already locked is actor Paul Sieber as Jack– a recently retired hitman who quit his job and has decided the life no longer suits him. You may remember Paul from such films as Ninjas vs. Vampires, Garden of Hedon, and Jebediah.

READ BELOW FOR CASTING INFORMATION!

WE ARE CURRENTLY LOOKING FOR ACTORS TO FILL THE OTHER ROLES AS WELL:

RED- MALE LEAD. early to mid 20s, unkempt and desperate, with only a little pride left. Former military, dishonorably discharged. Up and coming hitman who is about to learn a lesson in manners. We are looking for any ethnicity, just must be able to convey a lot of emotions with body language and facial expressions. Military experience not required but might be helpful if you have it. Physicality and firearms training also a plus. Does NOT have red hair.

MR. CLIENT- MALE 40s-60s. Support. Shadowy and wealthy figure who wanted his wife and kids murdered. Hires out to a psycho killer when Jack refuses the job. Jack takes the fight to him and makes it personal. There is a picture of his wife and daughters so if you have a family with a portrait that would be a big help as well.

BAYOWITZ- MALE late 20s to late 30s. Support. Psychotic replacement killer called to action when JACK quits his last job. Limited to no dialogue- we are looking for a CREEPY but normal person who can also possibly scrap a bit for an aggressive fight scene with Jack.

Anyone interested in a role can send an email to the film’s address, BITETHEHANDMOVIE@GMAIL.COM . Please include a headshot, resume, recent photo, and whatever links to videos or trailers you’ve been in! Tell us what you’re interested in auditioning for, and if you know of anything that might be useful to the production (locations, props, promotions, etc).

We will also begin location scouting and looking for producers VERY SOON! Expect to see emails!

This project will be a big step up for STRIKE A POSE!!! Films. We look forward to sharing more updates with you as we progress.

This entry was posted in Uncategorized. Bookmark the permalink.